‘Mafra’ is the nearest train station, just a few minutes’ drive from the house (the train station isn’t quite in Mafra town). THIS is the official train website to check times. Ideally you want one that doesn’t have a ‘U’ under service (changing trains from Urban to Regional is a bit complicated so ideally you want a direct train instead that only says ‘R’. The direct trains usually go from ‘Santa Apolonia‘ or ‘Sete Rios‘, both marked in red on the metro map below. Santa Apolonia is in Alfama, the most touristic area of Lisbon, and it could be a good spot to stay for a night before taking the train here the next morning (trains stop running in the late afternoon).

One of us would be very happy to pick you up from ‘Mafra Gare’ train station. To arrange it, best to send a message (in the ‘contact’ page) and leave your number – ideally Whatsapp. If you won’t be using a phone, then you could simply mention the time and day that your train arrives at Mafra. 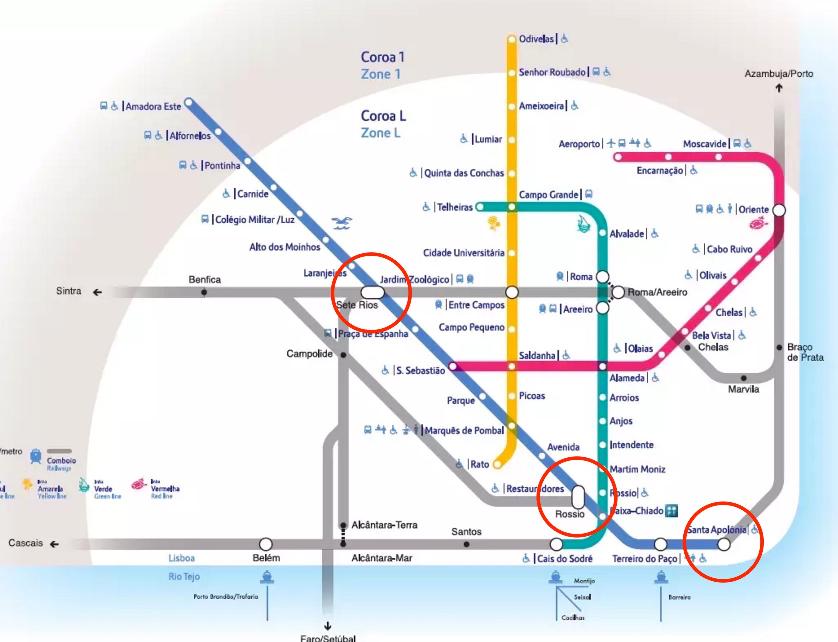 An Uber taxi from the airport to ‘The Groove House’ (registered on the Uber app) will cost around €20. Uber taxis aren’t allowed to pick you up from the arrivals terminal, so you’ll need to walk through to the departures terminal (terminal 1) and book one from just outside the terminal entrance.

If you’d like to save a few pennies, you could take the underground (red line) to Santa Apolonia then an overland train to the Groove House, but these aren’t so often. See above for details.

These are more pricy than Ubers (generally around €30, instead of €20), but it might be wise to set a maximum price with the driver. Most taxi drivers are a little bit old-fashioned and they need directions on how to get here, so here‘s a set of instructions which might be worth printing out for the driver, if you can.

If you’d like to save a few pennies, you could take the underground (red line) to Santa Apolonia then an overland train to the Groove House, but these aren’t so often. See above for train times.

1. Pro Musicians' Retreat
"Pro" = you play professionally, you can effortlessly lock into a solid groove, and can instantly pick up a basic chord progression by ear in a jam (applies to everyone in the booking)

2. Experienced Musicians' Retreat
"Experienced" = you play music on the side; have some experience jamming; can quite easily pick up a basic chord progression by ear, or easily keep time to a basic rhythm

3. Music Lovers' Retreat
• For amateur/aspiring musicians, or if you love hearing music

• 'Pro' musicians: 60% discount
• 'Experienced' musicians: 40% discount
* applies if most guests are one of these levels (see retreat options for definitions)